Select prompts of your choice

Users with 3 prompts receive up to 128% more matches.

View, post and join conversations in languages from alternate dimensions.

Select the languages you know.

Add at least 5 interests to your profile. You'll be able to discuss, engage, and meet like-minded souls in these communities.

Users with at least 6 real photos receive up to 248% more matches.

Tell others about yourself!

Users with a description receive up to 162% more matches. You may fill this out later by editing your profile.

Yeah it's a spinosaurid I think

Dimetrodon is gonna do it for me everytime. 🤌

Technically not a dino but I'll allow it

people in the personality universe

I need to find this book!!! 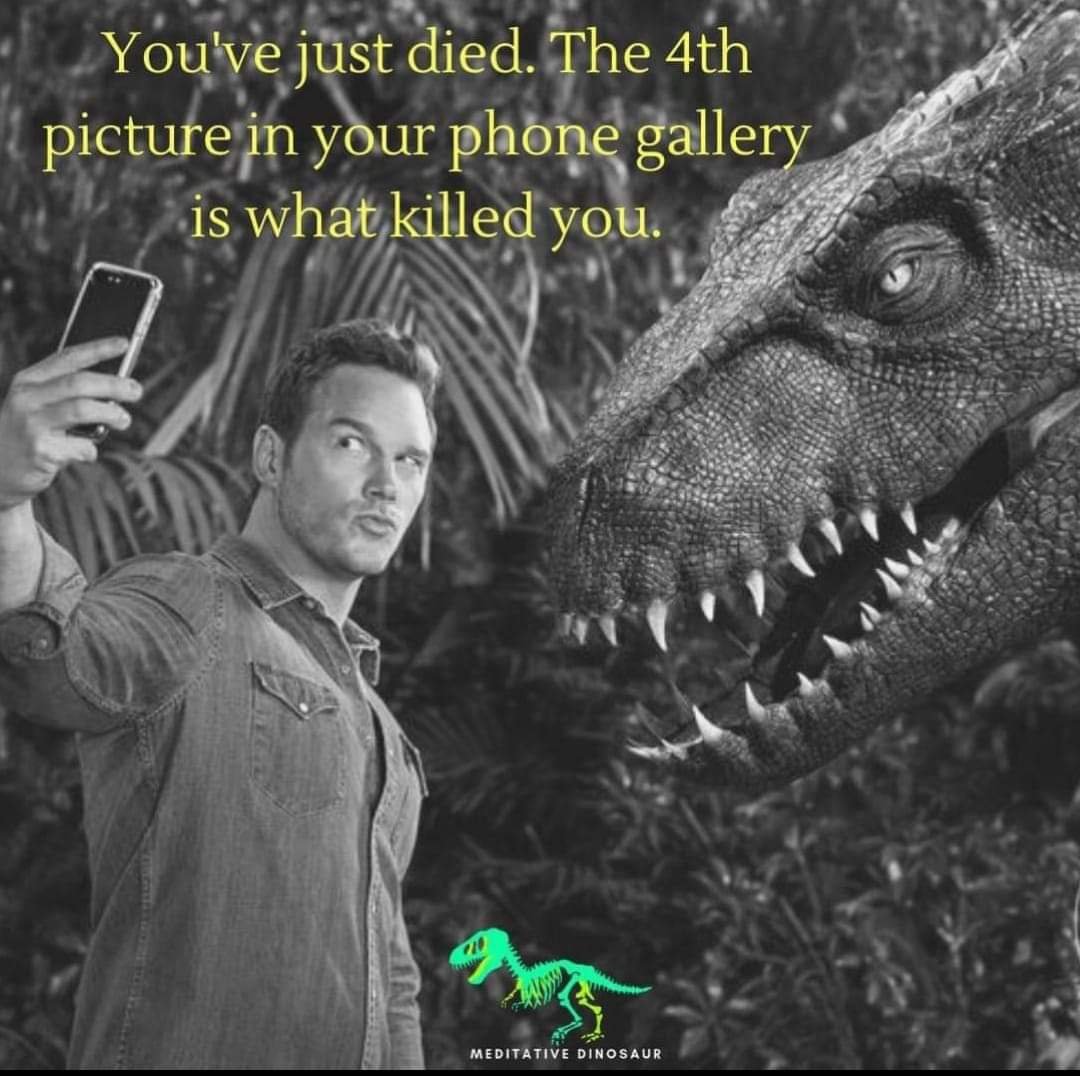 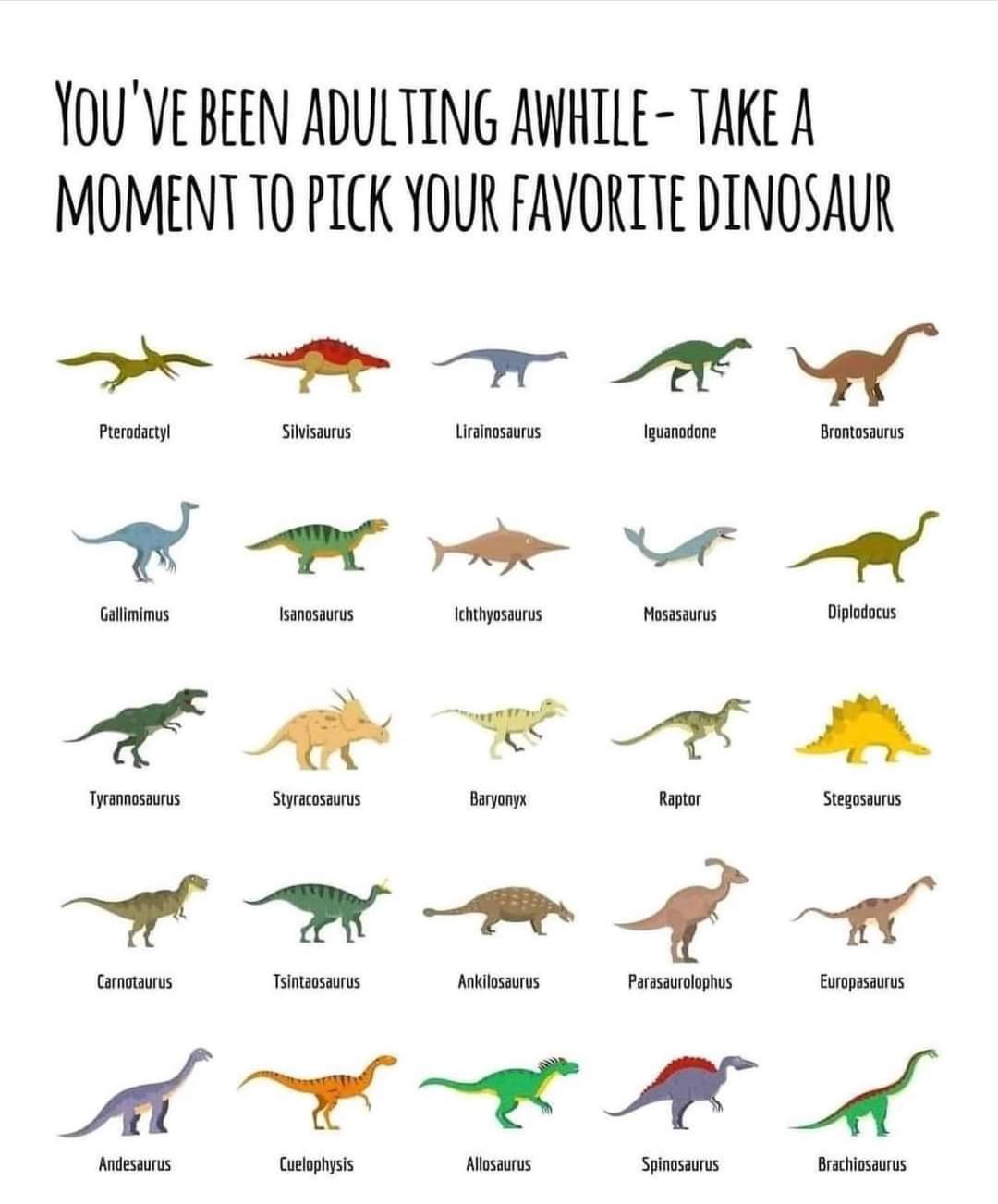 Let's even expand it to pterosaurs and ancient crocodilians, if you're not sure. I love Utahraptor! The largest dromaeosaurid we've found so far, and it's massive! Bigger than a person reaching more than 20 feet (about 6 meters)! What other dinosaurs are favorites?

You look like you need a Dino break :) I also just notice the pterodactyl isn't technically a dinosaur but.. whatever 😂😂

The Old Yet Still Important Question

What is your favorite Dinosaur/prehistoric animal? Bet you haven't heard that Question since 3rd grade

As children, we are often shaped by our surrounding environemt, our teachers, our parents, the books we read, and the television we consume. Many in television realized this, and capitalized on it. While some chose this demographic to entertain, or sell to, there are many greats who took this opportunity to teach and inform, showing kids values and knowledge they will someday use. Among them are Dora the Explorer, Mr. Roger's Neighborhood, Blue's Clues, and most famously, Sesame Street. There is one seminal figure who has simultaneously remained at the edge of our collective consciousness, and forgotten for what it truly was, despite being one that has had such a great impact on multiple generations. That figure, is a little dinosaur named Barney. Barney was created in 1988 by Sheryl Leach, Kathy Parker, and Dennis DeShazer, reaching television status in 1992, and running for 14 seasons and a movie until its cancellation in 2010. Barney dominated television for a long while, winning a Daytime Emmy, and a set of footprints in Mexico's Walk of Fame. Unfortunately, Barney and Friends' legacy has been less than ideal, through no fault of its own. After 2001, the 90's positive idealism was shattered, and American popular culture, much like the culture as a whole, took a downward spiral into edgy reassessment of culture as a whole. The rock was angrier, the TV was grunge, movies were darker, and our favorite cartoon mascots were secretly implanting satanic messages in our kid's minds. This is nothing special, and has become a staple of young children's cartoons, Peppa Pig, Dora, My Little Pony, anything that was naive, and could be easily ruined with some cursing and gore on early YouTube and NewGrounds. Ultimately, that is all that Barney was left with. The jokes were obvious no matter how you look at it, a dinosaur, or a grown man in a costume, hangs around children and sings unnecessarily peachy music, the violence is sitting there for anyone willing to point it out. Barney itself however, was at its core a project of love, made with every intention of creating a safe space for kids who needed a friend. It was aimed at the youngest, and was not shy about that fact, many would in fact say it was, ironically, toothless, "too safe" "too unchallenging", going as far as blaming the modern emotional renaissance entirely on Barney and Friends being too pampering and juvenile. This is no less true within the dinosaur community, who sees Barney as the mascot for infantilizing dinosaurs. As a young Mexican immigrant, (I came to the US at 4 years old), I was an isolate fish out of water, nervous, and easy to anger. I had no reference for communicating well with other kids, because I had led a confusing life in my early age, but I did like dinosaurs. And there was one dinosaur who spoke to me, who told me that everything was okay, and we make our own happiness and joy, away from the challenges, away from the comfusion and hurt. Barney was not too tame for 7-year-olds, parents, teens, and older kids hated it for the same reason I and many other loved it, because it was a show about happiness, about loving each other and being there. It aspoused the same values Mr. Rogers did, but it was fun, and goofy, it was colorful, but it wasn't dumb. If anything, the Barney Renaissance is at hand, as recently as 2019, Daniel Kaluuya (Get Out, Black Panther) and his production team were in talks of making a new Barney The Dinosaur film, while staying true to its spirit. The song Purple Dinosaur, by NoBygDyl also used the themes of the show to aspouse kindness and love for each other. Barney's message of kindness and love is not lost on those with fond memories of the Prehistoric Babysitter. To this day those words, and songs, ring heavily, now more necessary than ever. If there's anything we should really take away from Barney and Friends, it's those few words, that meant so much to me, and Millions of others: I love you You love me We're a happy family With a great big hug And a kiss from me to you Won't you say you love me too? 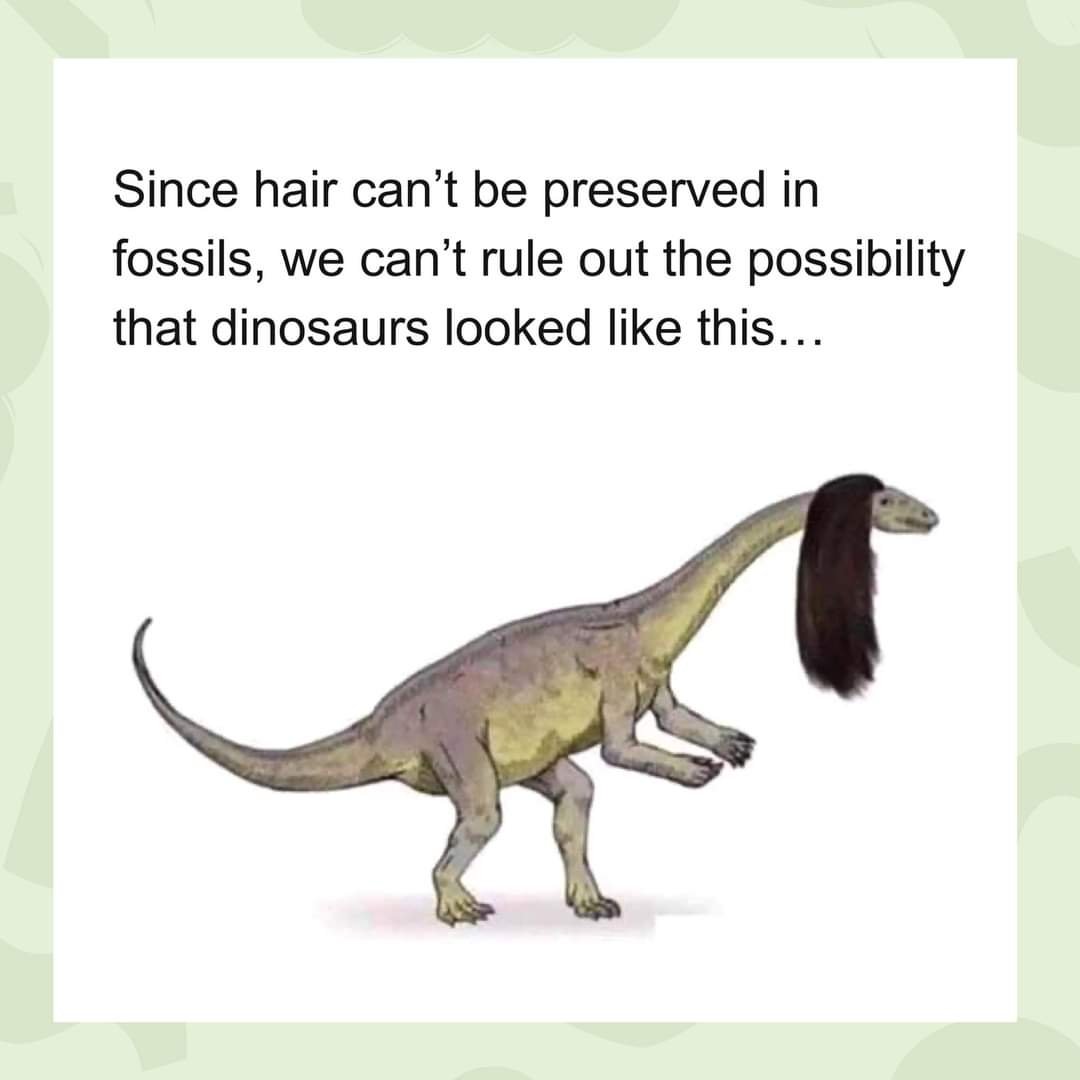 I don't believe dinosaurs existed!!! Not trying to be a conspiracy theorist or anything, but I just don't believe they existed. I believe all these so called fossils are fake. They have fossils of cavemen and women too don't they?? But Adam and Eve apparently were the first two people that walked this Earth and the bible doesn't say ANYTHING ABOUT THEM WALKING WITH DINOSAURS!! In my opinion, for those who follow the Bible, you can't believe in dinosaurs because it would contradict everything that the Bible says and most importantly that God created Adam then Eve first.. These are just my opinions.. I could be wrong.... What do you believe?

My favorite is pachycephalosaurus. What's better than a dinosaur designed to just bash the heck out of something with its noggin?!

This gotta be true right? 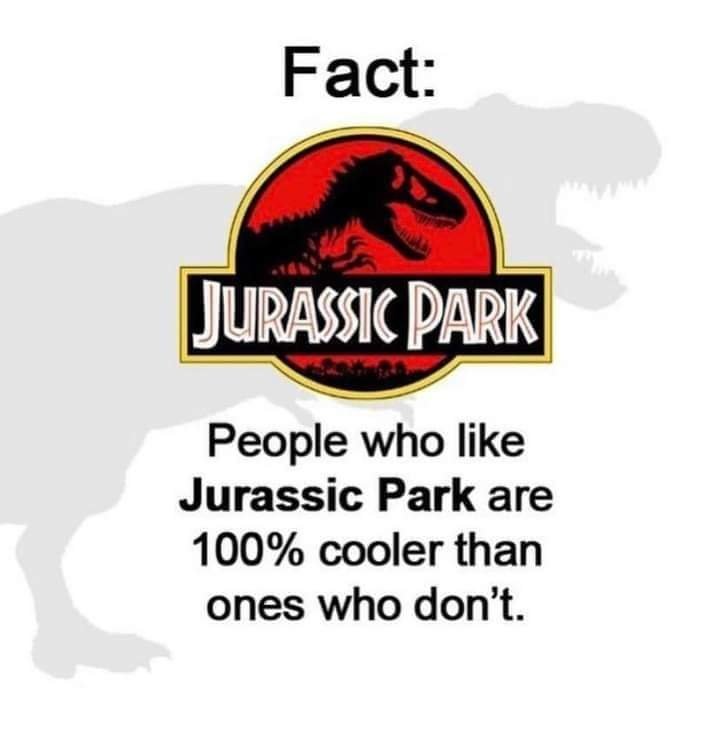 It's been a while, but every shot I've taken this year has been a masterpiece.

I've had this Carnegie Safari Stegosaurus my entire life, and since I started photography in 2015, I never got the perfect picture with it. Until today. In all its glorious, nostalgia, fiery coloration, and humble, but powerful appearance, all lit up by a pink sky. 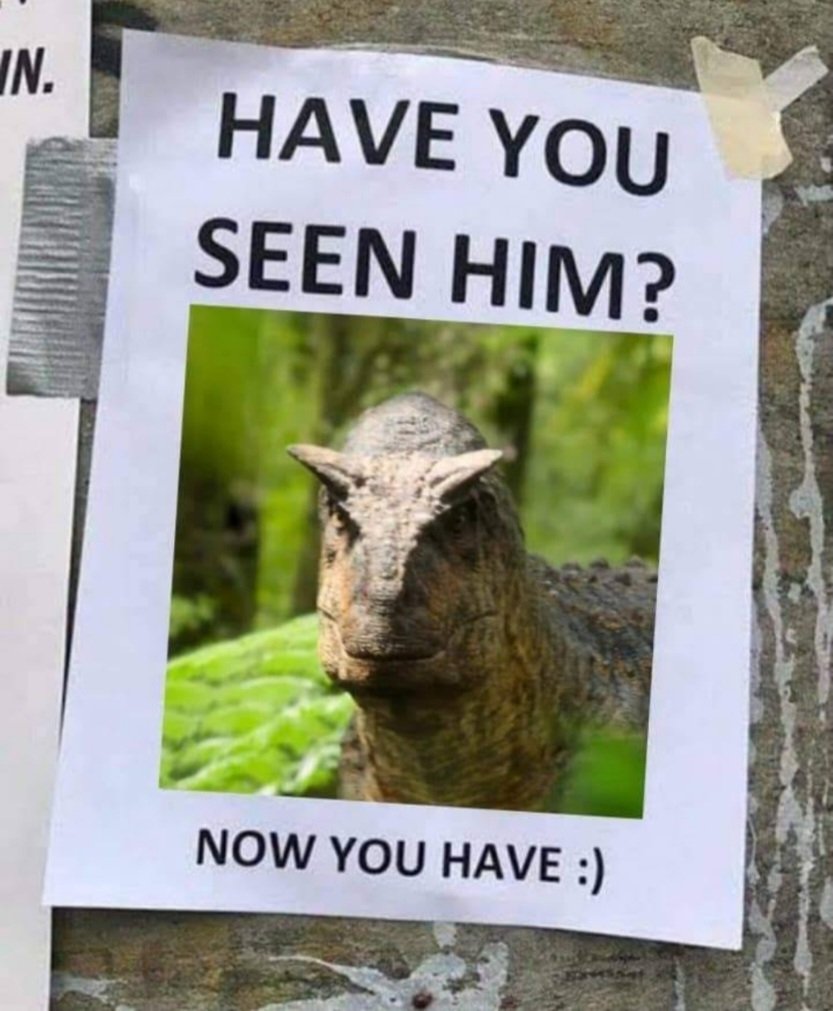